Upon completion, participants will be able to:

This R3 Training includes a goal of developing future training and modules that will provide continuing education opportunities for all involved with R3 efforts.

New Time: APHIS and NRCS to Host April 5th Joint Listening Session on Feral Swine Farm Bill Provision
The time of the joint APHIS-NRCS feral swine listening session has been changed and will now take place on Friday, April 5, from 1:00 p.m. to 4:00 p.m. EDT. We apologize for the inconvenience. If you previously registered for the original March 28th listening session date, you are automatically registered for the April 5th session and can use the phone number and unique conference code you already received via email. If you still need to register, you can do so by clicking on the link in the invitation.
Please join APHIS Administrator Kevin Shea and NRCS Chief Matthew Lohr along with members of their leadership teams, including APHIS Associate Administrators Mike Gregoire and Mike Watson and NRCS Acting Associate Chief Kevin Norton on Friday, April 5, from 1:00 p.m. to 4:00 p.m. EDT for a Farm Bill Listening Session via teleconference. This listening session is an opportunity for interested State and Tribal partners as well as stakeholders to comment on the feral swine provision in the Agricultural Improvement Act of 2018 that will be jointly managed by APHIS and NRCS.
We recognize that many of you live outside of the Washington, D.C., area, and we hope this call-in format makes it easy for you to participate in the upcoming session and share your thoughts on implementation.
The summary pasted below provides a brief overview of the feral swine farm bill provision. The listening session will also begin with a short briefing on the provisions followed by stakeholder comments for the remainder of the call. In order to hear from as many participants as possible, we ask that you plan to limit your comments to 3 minutes or less. If you would like to provide a written copy of your comments either before or after the listening session, you can do so by sending them to hallie.zimmers@aphis.usda.gov.
To participate in the listening session, we ask that you please register in advance by clicking on the link below and providing your name, organization and email address. Once you submit your information, you will promptly receive an email that includes the call-in number and a unique conference code to enter the call. You will also have the opportunity to join by webinar. The listening session will be recorded.
If you would like to make other colleagues aware of this event, please forward them the link below. To avoid any problems connecting to the call, do not share your unique code.
Registration Link: http://ems8.intellor.com?do=register&t=1&p=813125

The Association of Fish & Wildlife Agencies strongly supports the introduction of the National Fish Habitat Conservation Through Partnerships Act this week in both the House and the Senate (S.754).  This legislation aims to codify the National Fish Habitat Partnership, whose mission is to protect, restore and enhance the nation's fish and aquatic communities through partnerships that foster fish habitat conservation and improve the quality of life for the American people.  Rep. Rob Wittman (R-VA) and Rep. Marc Veasey (D-TX) in the House, and Senator Mike Crapo (R-ID) and Senator Benjamin Cardin (D-MD) introduced these bipartisan bills on March 12, 2019.

“The Association is excited to see this legislation introduced which, if passed, would help restore our fish populations and habitats across the nation,” said Ed Carter, President of the Association of Fish and Wildlife Agencies and Executive Director of the Tennessee Wildlife Resources Agency.  “We thank Rep. Wittman and Rep. Veasey in the House, and Senator Crapo and Senator Cardin in the Senate, for their leadership on this important legislation that will help states and local communities with the management and conservation of fish and fish habitats that also bolster our great outdoor recreation economy.”

“The Association is delighted to see the Land and Water Conservation Fund has a secure future,” said Ed Carter, President of the Association of Fish and Wildlife Agencies and Executive Director of the Tennessee Wildlife Resources Agency. “We look forward to working with our federal partners and supporting the Land and Water Conservation Fund to invest in clean water and productive land and wildlife habitat across the nation.”

The Land and Water Conservation Fund works in partnership with federal, state and local efforts to protect land in our national parks, national wildlife refuges, national forests, national trails, and other public lands. The program’s goal is to preserve working forests and ranchlands; to support state and local parks and playgrounds, to preserve battlefields and other historic and cultural sites and to provide the tools that communities need to meet their diverse conservation and recreation needs.

The bill was named in honor of former Congressman John Dingell who passed away last month. The Michigan Democrat was a lifelong outdoorsman and tireless conservation champion, responsible for leading many of our nation’s landmark conservation bills during his 59 years in Congress.


Last week, at the 84th North American Wildlife & Natural Resources Conference, state directors approved a statement entitled Association of Fish and Wildlife Agencies Statement on Chronic Wasting Disease Etiology during the of the Association of Fish and Wildlife Agencies business meeting. This statement was drafted by leading experts in wildlife disease management and affirms the current scientific consensus that Chronic Wasting Disease, a 100% fatal disease of deer, elk, moose, and reindeer, is caused by a misfolded protein called a ‘prion.’

"Recent media coverage has focused on alternative theories that suggest that Chronic Wasting Disease may be caused by bacteria or other sources," said Ed Carter, President of the Association of Fish and Wildlife Agencies and Executive Director of the Tennessee Wildlife Resources Agency. "We felt that until there was definitive proof otherwise, it was important that the Association go on record as supporting the overwhelming scientific consensus that Chronic Wasting Disease is caused by mutated protein known as prions."

The Association and its members have been at the forefront of Chronic Wasting Disease management for decades, having most recently written and adopted the Best Management Practices for Prevention, Surveillance, and Management of Chronic Wasting Disease which provides extensive guidance to state, federal, provincial, and territorial wildlife agencies tasked with managing this disease.

"I strongly support the statement that is being released by the Association of Fish and Wildlife Agencies today," said Bob Duncan, Director of the Virginia Department of Game and Inland Fisheries and chair of the Association's Fish and Wildlife Health Committee. "Our nation's hunters deserve to have the best available scientifically credible information about this deadly disease, and to know that our state, federal, provincial, and territorial wildlife agencies are doing everything within their power to stop its spread." 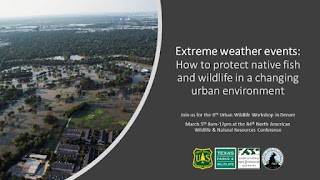 Extreme weather events: How to protect native fish and wildlife in a changing urban environment

The world is increasingly becoming urbanized. In the United States alone, over 80% of the population now resides in urban areas. At the same time, our climate is rapidly changing and causing novel issues for fish and wildlife, as well as for people, their communities, and their jobs. Extreme events like hurricanes and drought, wildfire, and nuisance flooding, among others, are affecting these systems in new and record-breaking ways. Increasingly, the public will be looking to their natural resource agencies for ways to prepare for, endure, and restore after these events. In this half-day workshop, we will explore these critical issues and the solutions to them. Hear stories from leaders in the field, engage new partners, and learn the creative approaches to adapt effectively in a changing world.

The Association Commends the Service for Opening 38 Refuges

Washington D.C. (January 9, 2019)- The Association of Fish & Wildlife agencies learned yesterday that the U.S. Fish and Wildlife Service (Service), for the next 30 days, using previously appropriated funds, will bring back a limited number of employees to resume work on high priority projects and activities at 38 National Wildlife Refuges.

“The Association would like to thank Acting Secretary David Bernhardt for continuing to meet our community’s priorities and needs with the limited resources and authorities at hand during the partial federal government shutdown,” said Ed Carter, President of the Association of Fish and Wildlife Agencies and Executive Director of Tennessee Wildlife Resources Agency. “The opening of these National Wildlife Refuges will also bring economic benefits to local communities.”

During the partial federal shutdown, the Service has been able to keep parts of some National Wildlife Refuges accessible to the public where the presence of federal employees or contractors is not required.  The Service is adding “additional staff to support scheduled events and other public uses on 38 selected refuges based on criteria that takes into consideration visitation during the month of January, opportunities, including hunting [and fishing], that would otherwise be limited or unavailable during this time, and protection, management and security of public resources.”