On Thursday, December 17, Matt Hogan announced he has accepted a position with the U.S. Fish and Wildlife Service as the new Assistant Regional Director for Migratory Birds and State Programs in Denver, Colorado.

“Making the decision to leave the Association is certainly a difficult one. However, after working in Washington, DC for 20 years, I am looking forward to the change,” said Hogan. “In my new position, I hope to continue working closely with state agencies in the Mountain Prairie region and continuing to strengthen the working relationship between the Service and state fish and wildlife agencies to elevate sound, science-based conservation of America’s fish and wildlife resources.”

“We are a stronger Association because of Matt’s leadership, insight and expertise in advancing fish and wildlife issues on a national scale over the past three and half years,” said John Frampton, President of the Association of Fish and Wildlife Agencies and Director of the South Carolina Department of Natural Resources. “We wish him continued success as he begins this next chapter in his already exceptional career.”
Posted by The Association of Fish and Wildlife Agencies at 12/22/2009 02:46:00 PM 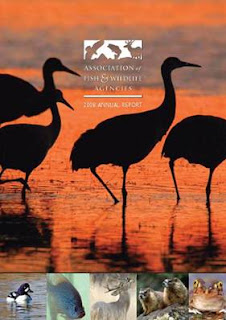 Arizona Game and Fish Department landed the cover of last year’s AFWA Annual Report with this stunning photo by George Andrejko. Who will take the spot and get bragging rights this year?

Submit your best hi-resolution photos of fish, wildlife, habitats, fish and wildlife agency staff at work or people enjoying your state’s natural resources. Images can be from state, territorial or provincial publications or personal photography. The entrant must be connected to a state, territorial or provincial fish and wildlife agencies to be eligible for the cover.

Every photo reproduced in the 2009 Annual Report will include a photographer credit. Photos may also be featured on the new fishwildlife.org web site. Of course, you retain the rights to your photograph; however, by entering the contest, you grant the Association use of the image. Digital images must be a resolution of at least 300 dpi and 8” x 10.” To look at previous Annual Report covers, visit www.fishwildlife.org/press_pubs.

Alternatively, you can mail a CD to the address below. Feel free to forward this announcement or call Laura with questions.

On the Joint Ventures for Bird Conservation Act
"The future of many of the 1,400 bird species that occur in North America is in jeopardy. Many populations are in decline, some moderately, some precipitously, as habitats continue to be degraded or lost throughout their ranges which can span countries, continents — even hemispheres.

It is imperative, especially in light of future impacts of climate change, that we maintain enough high quality habitats across the hemisphere to sustain viable populations of migratory birds. This is why the Joint Ventures for Bird Habitat Conservation (HR2188) Act which emphasizes habitat conservation and management across the hemisphere, are so critical."