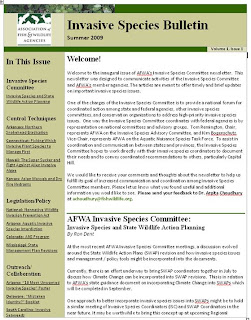 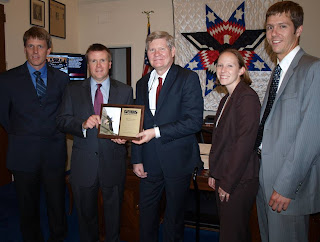 The award recognizes the Senator’s leadership in supporting legislation to establish a first-of-its-kind funding program to help state fish and wildlife agencies further move their State Wildlife Action Plans into on-the-ground action to prevent at risk wildlife from becoming endangered nationwide.
“I am honored to receive this award from the Association of Fish and Wildlife Agencies,” Johnson said. “South Dakota has a deep history of appreciation for the outdoors and that’s why I introduced important legislation that will help preserve our wildlife.”

As introduced by Senator Johnson, the Teaming With Wildlife Act would provide $350 million annually over five years through a portion of the royalties collected from Outer Continental Shelf drilling and mineral development on federal land to help state agencies carry out their State Wildlife Action Plans, the primary, comprehensive conservation tool adopted in every state and territory to keep fish and wildlife healthy and off the list of threatened and endangered species.

“We are grateful to Senator Johnson for recognizing that taking action to conserve wildlife before it becomes endangered is environmentally sound and fiscally responsible to taxpayers, said Matt Hogan, Executive Director of the Association of Fish and Wildlife Agencies. “Once a species declines to the point of potential extinction, recovery efforts become risky and expensive. The Teaming With Wildlife Act is a major milestone in the effort to secure dedicated funding essential for state agencies’ fish and wildlife conservation efforts.”

To lean more about Teaming With Wildlife and State Wildlife Action Plans, visit http://www.teaming.com/ and http://www.wildlifeactionplans.org/.