AFWA to Host April 2 Congressional Briefing on the Lacey Act 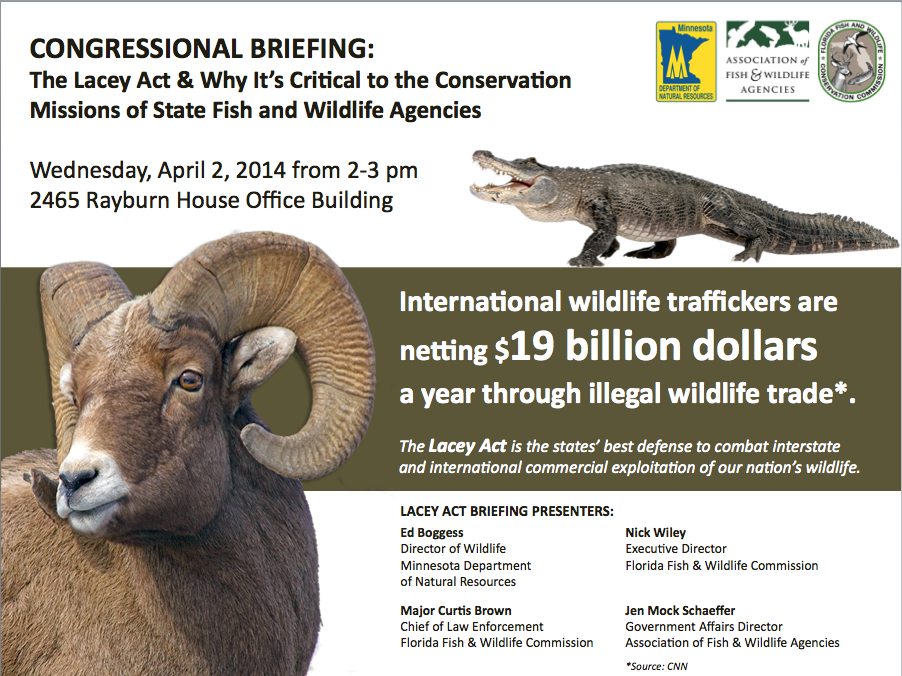 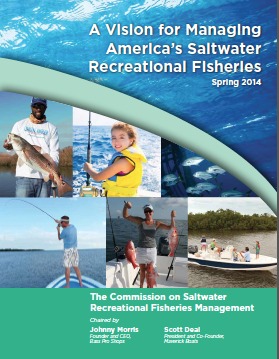 Congress is currently revising the Magnuson-Stevens Fisheries Conservation and Management Act, the law that governs our nation’s marine resources. Recreational saltwater anglers and the sportfishing and boating industries are intensifying efforts to ensure that their social, conservation and economic priorities are well represented in the legislative process.

“Our commission offers a clear path to better stewardship of America’s marine fishery resources,” said Morris. “Today we ask Congress to join us on that path. We extend the invitation on behalf of all current anglers and future generations of anglers who will enjoy our nation’s resources for many years to come.”

Previewed in February during the 2014 Progressive Miami International Boat Show in Miami, Fla., A Vision for Managing America’s SaltwaterRecreational Fisheries outlines recreational fisheries management issues that need to be addressed in the Magnuson-Stevens Act reauthorization.

“This is the first time that the recreational fishing and boating community has set forth a comprehensive vision,” Deal said. “I’m honored to be a part of this effort and proud to help lead our collective industries in ensuring that Congress hears our voices.”
The economic impact of saltwater angling in the U.S. is considerable. In 2011, approximately 11 million Americans saltwater fished recreationally, spending $27 billion in pursuit of their sport. That activity generated more than $70 billion in economic output and sustained 450,000 jobs. Anglers contribute more than $1.5 billion annually to fisheries habitat and conservation via excise taxes, donations and license fees alone.

Throughout 2013, members of the blue ribbon commission met to deliberate and debate strategies to improve saltwater recreational fisheries management. A wide range of experts and other stakeholders, including economists, scientists, federal and state agency administrators, environmentalists, charter captains and individual recreational anglers, were invited to meet with the commission to provide information and advice on a variety of fisheries management issues. The report reflects their input.

“Our nation’s marine fisheries and their management needs vary widely from Alaska to Florida to coastal New England. Reauthorization of the Magnuson-Stevens Act is important to the stateside toolbox for delivery of conservation- and recreation-based marine fisheries programs,” said Ron Regan, executive director of the Association of Fish & Wildlife Agencies. “We commend the Morris-Deal Report for its thoughtful groundwork in thinking through visionary improvements for the future, including stock rebuilding timelines.”

“We look forward to increasing state flexibility in meeting their marine fisheries conservation objectives through reauthorization of the Act.”

“The Magnuson-Stevens Act established a management system for commercial fisheries, which has made great strides in ending commercial overexploitation of our marine fisheries,” said Jeff Angers, president of the Center for Coastal Conservation. “However, for more than three decades it has focused primarily on commercial fishing. It’s time for Congress to do something for saltwater recreational fishing.”

A Vision for Managing America’s SaltwaterRecreational Fisheries identifies six key policies that would achieve the commission’s vision. Those recommendations primarily focus on the Magnuson-Stevens Act.

"Congress should establish a national policy to promote saltwater recreational fishing,” said Mike Nussman, president and CEO of the American Sportfishing Association. “In addition, Congress must open the ‘rusted-shut’ door of marine fisheries allocation to achieve the greatest benefit to the nation.”

Secretary of the Interior Sally Jewell today announced that the U.S. Fish and Wildlife Service will distribute nearly $1.1 billion in excise tax revenues to state and territorial fish and wildlife agencies to fund conservation through the Wildlife and Sport Fish Restoration Program.

The Wildlife and Sport Fish Restoration Trust Funds are not taxpayer dollars derived through federal income taxes. These funds are raised through excise taxes levied on bows and arrows; guns and ammunition; fishing tackle and equipment; and electric outboard motors and motor boat fuels. The taxes are paid upfront by manufacturers, producers and importers of taxable equipment, and in turn, paid for by sportsmen and women.

The financial support from America’s hunting, shooting sports, fishing and boating community through their purchases of taxable gear and hunting and fishing licenses is the lifeblood for funding fish and wildlife conservation, comprising approximately 80% of a state fish and wildlife agency’s annual budget.

According to DOI, the total distributions to state agencies this year are $238.4 million higher than last year because of the inclusion of funds that were not distributed in 2013 because of the government sequester, as well as an increase in excise tax receipts from sales of firearms and ammunition in the Wildlife Restoration Trust Fund.

All told, the Trust Funds benefit every American by providing cleaner and healthier environments, public safety education and access for outdoor recreation.

According to data from the latest national survey, wildlife-related recreation was a $145-billion dollar economic driver enjoyed by 90 million people—38% of the U.S. population age 16 and older—in 2011. This level of outdoor activity and Americans’ spending on taxable gear and trip-related expenses supports thousands of jobs in industries and businesses connected to fishing, hunting, recreational shooting, boating and the observance of wildlife, especially in rural communities.

The Association of Fish & Wildlife Agencies' National Grants Committee reviewed 13 proposed National Conservation Needs (NCNs) and recommended the approval of 11 NCNs for the 2015 cycle of the Multistate Conservation Grant Program. NCNs are the foundation of the multistate program and establish the states’ funding priorities for the grant cycle.

State fish and wildlife agency directors approved the list of 11 at AFWA's spring Business Meeting held March 14, 2014 during the North American Wildlife and Natural Resources Conference. The MSCGP funding opportunity/letter of intent solicitation will be posted the week of March 24.

NCN 3: Improve Benefits for Fish, Wildlife, and their Habitats through Evaluation of Efficacious Management Strategies for Feral Swine

NCN 7: Strengthening State Fish and Wildlife Agency Capacity to Understand and Respond to Changing Trends in Constituent Values and Demographics

NCN 11: Improve Benefits for Fish, Wildlife, and their Habitats as the 2014 and Future Farm Bills are Implemented


> Read the full description of each NCN

> Learn more about the Multistate Conservation Grant Program
Posted by The Association of Fish and Wildlife Agencies at 3/21/2014 10:34:00 AM

The Association of Fish & Wildlife Agencies Concerned about Major, Unexpected Cut to the State and Tribal Wildlife Grants Program in the President's FY15 Budge

The successful and popular State and Tribal Wildlife Grants program was targeted for a 15% cut in the Administration's budget released on March 4, 2014. The proposed cut would drop funding to state fish and wildlife agencies to$50 million for the next fiscal year, down from $58.7 million this current fiscal year. State and Tribal Wildlife Grants are critical to state agencies for funding on-the-ground conservation to prevent fish and wildlife from becoming endangered.

The cut to the State and Tribal Wildlife Grants Program was unexpected since overall spending in the U.S. Fish and Wildlife Service budget is higher than last year.  Similar cuts were not made to other grant programs.

On March 18, Association of Fish & Wildlife Agencies President Dan Forster sent a letter to the U.S. Department of the Interior Secretary Sally Jewell on behalf of the Association expressing AFWA's disappointment with the 15% cut to the program.

The State and Tribal Wildlife Grants program has endured a 35% cut since FY10, despite being the only federal grant program with the specific purpose of preventing expensive, last-ditch recovery efforts once a species is listed as federally endangered.  The program has successfully prevented new federal listings and is used by states and their partners to implement Congressionally mandated State Wildlife Action Plans that prioritize species conservation.

Each state, territorial and district state fish and wildlife agency is a recipient of formula-based State Wildlife Grant funding. The  program is supported by the more than 6,400 organizations that make up the national Teaming With Wildlife coalition, representing millions of birders, hunters, anglers, hikers and other outdoor enthusiasts.

The Association implores Members of Congress, at a minimum, to continue the State and Tribal Wildlife Grants Program at its current funding level. 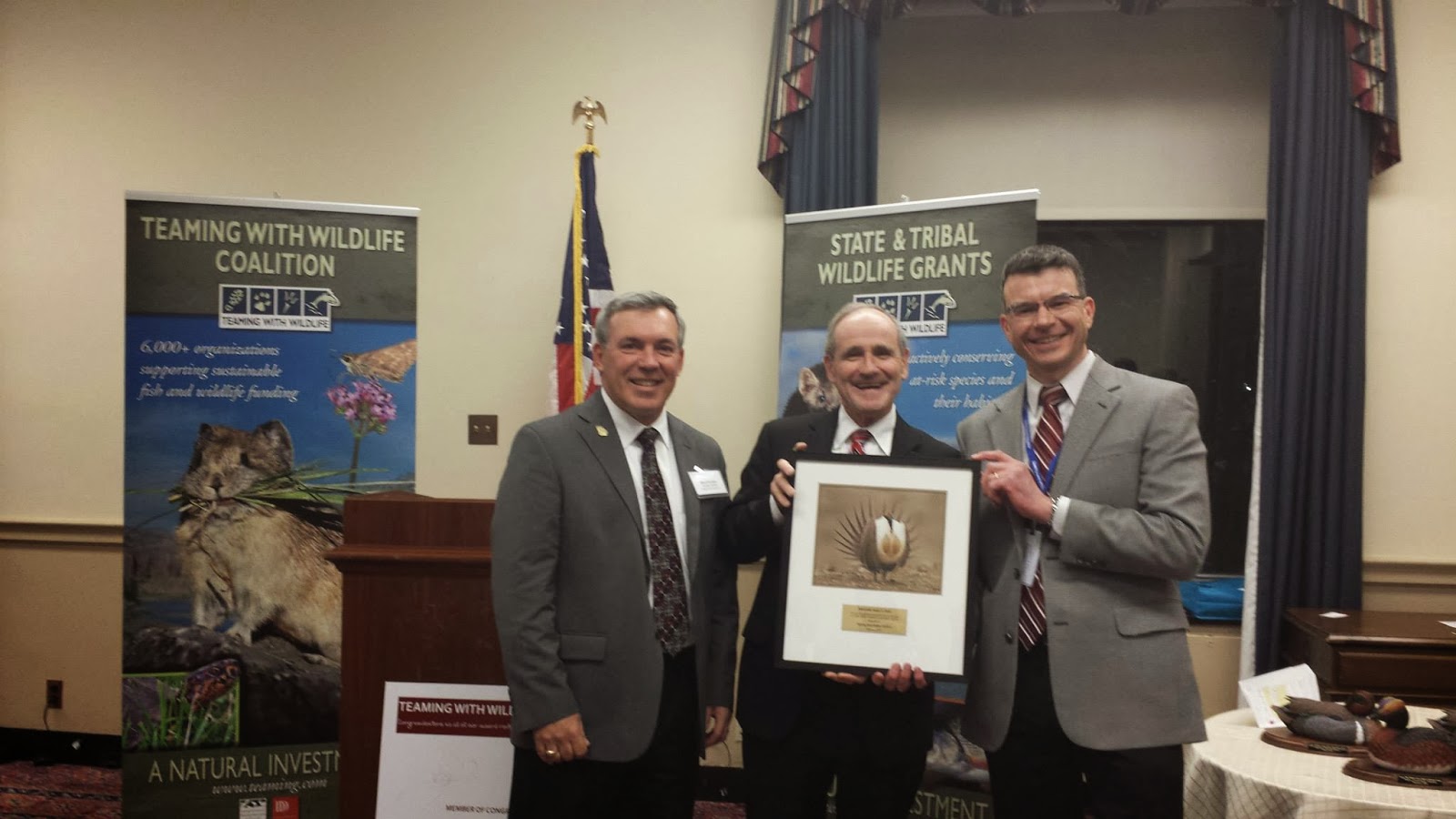 The Congressional Awards presentation culminated the Teaming With Wildlife Coalition’s annual, two-day advocacy Fly-In on Capitol Hill to raise awareness of the State and Tribal Wildlife Grants Program, the only federal program providing funding to states and their partners to conserve the more than 12,000 species that are at risk of landing on the endangered species list.

“I recognize that I am receiving this award because of hardworking Idahoans who work to maximize every dollar of the state wildlife grant funding I’ve worked to secure and to keep species off of the endangered species list,” said Senator Risch. [View Senator Risch's full acceptance speech]

“I’m very gratified by your recognition of me for, hopefully, what is our good contribution to your work to educate, promote and protect that which is wholesome, natural and good for the well-being of our country,” said Congressman Fortenberry.

I’m very, very grateful to what you all are doing to be good stewards of the land and water and to protect our wildlife so that we can enjoy, truly enjoy, the abundance of this wonderful gift that we have in our country,” said Congressman Fortenberry.

The State and Tribal Wildlife Grants Program provides each state and territory with approximately $1 million annually to develop and implement their congressionally mandated State Wildlife Action Plans. The Plans assess the health of each state’s wildlife and habitats; identify the problems they face; and outline the actions needed to conserve them over the long term.

“Whether it is management of sage grouse and lesser prairie chickens in the West or gopher tortoises and declining bat populations in the East, pro-active conservation programs are more effective and less costly than an ‘emergency room’ approach,” said Dan Forster, director of the Georgia Wildlife Resources Division and 2013-2014 president of the Association of Fish & Wildlife Agencies. “The State and Tribal Wildlife Grants program is our best prescription for preventative care.”

However, since 2010, funding for the State and Tribal Wildlife Grants Program has been cut by more than 35 percent. In addition, further cuts to program lead to increased federal ESA listings and threaten the associated jobs and local economies tied the $45 billion wildlife recreation industry.

In addition to recognizing Members of Congress for their support of the State and Tribal Wildlife Grants Program, the Teaming With Coalition’s Steering Committee presented two awards to Coalition members.

The Network has worked in partnership with the Virginia Department of Game and Inland Fisheries and NWF’s Mid-Atlantic office over the past five years. Accomplishments include developing a strategy for safeguarding species of greatest conservation need from the effects of climate change by co-hosting two statewide workshops; and helping to grow the Virginia Teaming With Wildlife coalition by 60 members to reach a total of 188.

IUP researchers are among the Commission’s most valuable partners as a result of the Institute’s understanding of the Pennsylvania Wildlife Action Plan coupled with experience finding and implementing solutions to the state’s conservation needs.

For more information about Teaming With Wildlife and State Wildlife Action Plans, go to www.teaming.com.