The Association of Fish & Wildlife Agencies is now accepting Letters of Intent for the 2012 funding cycle of the Multistate Conservation Grant Program (MSCGP). Up to $6 million dollars is available each calendar year for projects that address regional- or national-level priorities of the state fish and wildlife agencies.

Letters of Intent must address one the six 2012 MSCGP National Conservation Needs:

Subject 1: Improve benefits for fish, wildlife and their habitats as provisions of the 2008 Farm Bill are implemented

Letters of Intent are due to the MSCGP Coordinator, Chad Klinkenborg, by Wednesday, May 4, 2011. No federal forms are required for Letters of Intent. The Association’s National Grants Committee will reconvene at the end of May to review and select the most competitive Letters of Intent to invite to submit full grant proposals. Grants are awarded on a calendar-year basis for one, two or three years to eligible recipients.

Please read the full RFP for details or contact the MSCGP Coordinator, Chad Klinkenborg, at cklinkenborg@fishwildlife.org.

2012 MSCGP Request for Letters of Intent

Schedule for the 2012 MSCGP Cycle 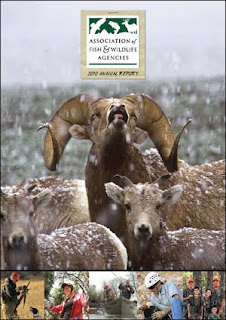 The 2010 Annual Report represents the views and voices of fish and wildlife agencies as they stand on the frontlines of conservation as stewards for North America’s fish and wildlife and the public’s trust. The report also highlights the outstanding participation of state, provincial, territorial and federal agencies as well as the greater conservation community and sportsmen industries in collaborating to realize the year’s accomplishments.

In 2010, the Association focused on these issues and outcomes:
• Protecting conservation authority through Congressional legislation and international representation;

• Securing conservation funding through the Farm Bill and State and Tribal Wildlife Grants;

• Connecting youth to conservation and enhancing relationships between agencies and the archery, hunting, shooting sports, boating and sportfishing industries through the Industry/Agency Coalition and the new Council to Advance Hunting and the Shooting Sports;

In addition, the report features stunning photography contributed by individuals from state fish and wildlife agencies and regional associations. Jesse Lee Varnado from the Montana Department of Fish, Wildlife and Parks was the “Land the Cover” Contest Runner-up and George Andrejko of Arizona Game and Fish Department was the President’s Choice Award winner for Best Gray Squirrel photo. An Honorable Mention goes to Larry Kruckenberg of the Western Association of Fish & Wildlife Agencies.

To order print copies of the report, contact Laura MacLean at lmaclean@fishwildlife.org.
Posted by The Association of Fish and Wildlife Agencies at 3/22/2011 07:27:00 PM

The Association of Fish and Wildlife Agencies and the Teaming With Wildlife steering committee honored Senators Patrick J. Leahy (VT) and Mike Crapo (ID) and Congressmen Jim Moran (VA) and Frank A. LoBiondo (NJ) last night for their outstanding leadership to advance wildlife conservation at a Congressional Reception “Celebrating Champions of Wildlife & the Environment” held to culminate the 10th Annual Teaming With Wildlife Fly-In.

The Teaming With Wildlife Fly-In is the most important outreach event on Capitol Hill for the 6,300+ member Teaming With Wildlife Coalition to secure dedicated funding to support on-the-ground conservation action in every state and territory to prevent wildlife from becoming endangered through State Wildlife Action Plans.

At the “Celebrating Champions of Wildlife & the Environment” Reception, the Association and the Teaming With Wildlife Coalition also presented awards to two partners for their significant efforts to protect critical fish and wildlife populations.

This year, Teaming With Wildlife Fly-in participants urged their Members of Congress to help ensure there is sufficient funding in the FY11 and FY12 budgets. HR1 passed by the House of Representatives would eliminate funding for the program in FY11.

Despite historical successes in bringing many wildlife species back from the brink of extinction, other species have continued to decline as evidenced by the staggering numbers listed under the federal Endangered Species Act. State hunting and fishing license dollars, federal excise taxes on hunting and fishing gear and motorboat fuel taxes have provided the backbone for funding the nation’s state wildlife conservation programs over the past century. However, there has always been a gap in funding for species that are not hunted or fished. State Wildlife Grants have provided state fish and wildlife agencies with the resources they critically need to partially fill that gap.

For more information about Teaming With Wildlife, visit www.teaming.com.
Posted by The Association of Fish and Wildlife Agencies at 3/03/2011 11:09:00 AM