Agricultural Conservation Committee
Subject 1: Integration of Fish and Wildlife Needs as the Conservation Provisions of the 2008 Farm Bill are Implemented


Letters of Intent
The MSCGP is now soliciting Letters of Intent for the 2010 cycle of this competitive grant program. Letters are due by midnight EDT Wednesday, May 6, 2009.

For more information about applying to the program carefully review the Guidelines below.

Additional information about the Program is available at http://www.fishwildlife.org/multistate_grants.html

Contact Christina Zarrella, MSCGP Coordinator at czarrella@fishwildlife.org with questions.
Posted by The Association of Fish and Wildlife Agencies at 3/31/2009 04:52:00 PM

“Conserving habitats for fish and wildlife is fundamental to ensuring the sustainability of these resources today and for generations to come,” said Matt Hogan, Executive Director of the Association of Fish and Wildlife Agencies, who attended this afternoon’s White House bill signing. “The Omnibus Public Lands bill recognizes many significant habitats for fish and wildlife that will be managed for the conservation value of these lands and habitats while allowing appropriate uses such as fishing, hunting and wildlife dependent-recreation for all Americans to enjoy the benefits of our great outdoors.”

The bill also authorizes the establishment of the National Landscape Conservation System (NLCS) under the Bureau of Land Management and explicitly in the statute affirms the authority of the state fish and wildlife agencies to continue to manage fish and wildlife on these NLCS lands. It also assures continued access to these lands for hunting, fishing, trapping and recreational shooting.

“The Association applauds Congress for passing and the President for enacting into law this legislation, which will yield great returns in preserving America’s treasured places and conserving our rich fish and wildlife legacy,” said Hogan. “In addition to the environmental gains from protecting public lands, the economic results derived from increased hunting, fishing and outdoor recreation opportunities are particularly important. Hunters and anglers nationwide contribute more than $120 billion to our economy each year and support close to three million jobs. ”

Read the President’s statement about what he calls one of the most important pieces of natural resource legislation in decades.
Posted by The Association of Fish and Wildlife Agencies at 3/30/2009 07:08:00 PM 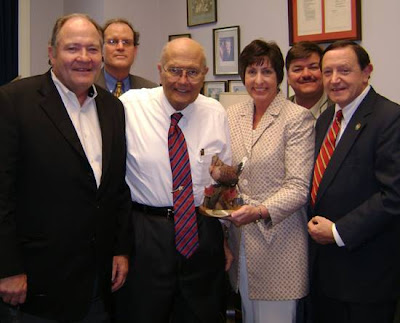 On March 18, the Association of Fish & Wildlife Agencies presented Congressman John Dingell (MI), Chairman Emeritus of the Committee on Energy and Commerce, with a Special Recognition of his commitment to fish and wildlife conservation and the state agencies. There is hardly a single piece of conservation and environmental legislation in the last 60 years that doesn't reflect Chairman Dingell's hand.

The award inscription reads, "To Chairman John Dingell, with our deepest respect and most heartfelt appreciation for your lifelong dedication to fish and wildlife conservation and support of the state fish and wildlife agencies."

Always the humble and gracious statesman, in thanking the Association for the recognition, Chairman Dingell paid tribute to the work of the state agencies and pledged to continue to help states in meeting fish and wildlife conservation objectives.

“Hunting, fishing and enjoying the outdoors has been engrained in all our lives. This legislation will help ensure that we can pass these South Dakota traditions on to future generations,” said Johnson, a member of the Energy and Natural Resources Committee. “I am proud to introduce this bill to help states across the country enhance wildlife conservation.”

The Teaming With Wildlife Act would provide $350 million annually over five years to help states carry out comprehensive wildlife restoration programs consistent with a state wildlife action plan. Since 2001, every state has adopted a state wildlife action plan as its primary conservation tool for keeping fish and wildlife healthy and off the list of threatened and endangered species. The legislation would create a reliable funding source under the Wildlife Conservation and Restoration Program (WCRP) through a portion of the royalties collected from mineral development on federal lands.

“Currently, states receive less than 10% of the funding that is needed to implement their Action Plans, which help manage 90% of the fish and wildlife within their borders including thousands of species known to be declining or are at risk,” said Mark Humpert, Teaming With Wildlife Director. “The introduction of the Teaming With Wildlife Act is the culmination of a more than two-decade-long effort to secure sustainable funding for state-based conservation of species in greatest need.”

The Association of Fish and Wildlife Agencies thanks Senator Johnson for his leadership in helping to prevent species from becoming endangered and Senators Stabenow and Tester for championing the bill. The Teaming With Wildlife Act also has the active support of the 6,000-member Teaming With Wildlife Coalition, which is the largest and most diverse wildlife conservation alliance ever assembled representing millions of birdwatchers, hikers, anglers, hunters, outdoor enthusiasts and conservation professionals nationwide.

For more information about Teaming With Wildlife and State Action Plans, go to http://www.teaming.com/.
Posted by The Association of Fish and Wildlife Agencies at 3/20/2009 12:53:00 PM

Many of our nation’s birds are sending us an important and troubling message about the state of our environment, according to an unprecedented report based on 40 years of data analyzed by the U.S. Fish and Wildlife Service, U.S. Geological Survey, state wildlife agencies and nongovernmental organizations. The report also shows that investment in conservation works, exemplified by the remarkable recoveries of waterfowl after more than 30 million acres of wetlands were restored and managed.

The U.S. State of the Birds report reveals sobering declines of bird populations during the past 40 years--a warning signal of the failing health of our ecosystems. For example:

--Hawaiian Islands: Threatened by habitat destruction, invasive species, and disease, nearly all native Hawaiian bird species are in danger of extinction if urgent conservation measures are not implemented immediately. Since humans colonized the islands in 300 AD, 71 Hawaiian bird species have gone extinct; 10 other birds have not been seen in as long as 40 years.

--Oceans: At least 39% of U.S. bird species restricted to ocean habitats are declining and almost half are of conservation concern, indicating deteriorating ocean conditions. Management policies and sustainable fishing regulations are essential to ensure the health of our oceans.

--Coasts: Half of all coastally migrating shorebirds have declined, indicating stress in coastal habitats besieged by development, disturbance, and dwindling food supplies.

--Aridlands: The aridland birds indicator shows a 30% decline over the past 40 years. Unplanned urban sprawl is by far the greatest threat to aridland birds. A regional system of protected areas can enhance quality of life for people and enable birds to survive.

--Grasslands: The grassland bird indicator shows nearly a 40% decline in the past 40 years, based on birds that breed exclusively in grasslands. Farm conservation programs provide millions of acres of protected grasslands that are essential for the birds in a landscape where little native prairie remains.

The U.S. State of the Birds report offers heartening evidence that strategic land management and conservation action can reverse declines of birds.

--Wetlands: Although many wetland birds show troubling declines, conservation programs have protected millions of acres and contributed to thriving populations of hunted waterfowl, herons, egrets, and other birds. Lesser Scaup, Northern Pintail, and several sea ducks are showing troubling declines, but most geese are increasing dramatically and many ducks have held steady.

--Waterfowl: On the whole, 39 species of hunted waterfowl have increased by more than 100% during the past 40 years. Successful waterfowl conservation is a model for widespread habitat protection.

The United States is home to a tremendous diversity of native birds, with more than 800 species inhabiting terrestrial, coastal, and ocean habitats, including Hawaii. Among these species, 67 are federally listed as endangered or threatened. In addition, more than 184 species are designated as species of conservation concern due to a small distribution, high-level of threats, or declining populations. 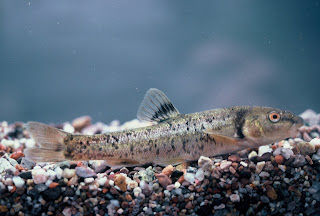 Arizona Game and Fish Department Director Larry Voyles told a congressional committee on March 3 that a proposed bill changing how free-roaming horses and burros are managed could result in adverse impacts to wildlife and habitat, as well as to the horses and burros the legislation seeks to further protect, and he offered several recommendations on ensuring a viable future for each.

Testifying on behalf of the Western Association of Fish and Wildlife Agencies (WAFWA), Voyles told the House Natural Resources Subcommittee on National Parks, Forests and Public Lands that some aspects of the legislation, H.R. 1018, could alter the ecological balance of the habitat on which wildlife and horses and burros depend for their existence.

Acknowledging the challenges the subcommittee faces in considering both the human concerns for free-roaming horses and burros and concerns for healthy wildlife populations and rangelands in the western states, Voyles offered several recommendations:


“If we fail to manage the balance between free-roaming horses and burros and the capacity of the land to support them and the wildlife that depend on those lands, then the laws of nature will prevail and we will fail as stewards of all three: land, wildlife, and horses and burros,” said Voyles.

H.R. 1018 would amend the 1971 Wild Free-roaming Horses and Burros Act. Among other provisions, it would remove the limitations on areas where horses and burros can roam, require the creation of sanctuaries for these animals, bolster the Bureau of Land Management’s horse and burro adoption program, and change the circumstances and methods by which free-roaming horses and burros could be removed.

Voyles was one of several experts who provided testimony before the subcommittee on the proposed legislation.