AFWA Releases a Literature Review on the Benefits of Outdoor Skills to Health, Learning and Lifestyle

The Association of Fish & Wildlife Agencies today released a white paper Benefits of Outdoor Skills to Health, Learning and Lifestyle: A Literature Review documenting the contributions of outdoor skills and wildlife-related outdoor education to health, learning and lifestyle in general and fishing and hunting participation in particular.

Research into the benefits of outdoor skills education highlights the valuable contribution they make to personal health and wellbeing. When young people are able to connect with the outdoors regularly, the positive outcomes are profound. They are happier, healthier from the physical exercise, effects of attention-deficit disorder are reduced and they score higher on standardized tests when natural environments are integrated into school curricula.

Outdoor skills activities such as hunting and fishing provide opportunities for the connection of individuals with nature (the natural environment), direct connection with other people (interpersonal) and with themselves (personal). Specifically, the benefits of these connections lie in the strength and placement of these connections from the leisure context to everyday lives.

Highlighted Research Findings – The Benefits of Taking It Outdoors:

Overall, the literature implies the need to adopt a broader-based conception of health from a holistic ecological perspective that moves beyond human physical and mental health to one that includes familial, communal, national, international and global ecological health. Active living is crucial to healthy lifestyles and leads to potentially greater participation in fishing and hunting.

The report was developed by the Association of Fish and Wildlife Agencies’ North American Conservation Education Strategy under contract with Cottrell & Associates: Environmental Consulting. Designed by experts from state fish and wildlife agencies, the North American Conservation Education (CE) Strategy delivers unified, research-based Core Concepts and messages about fish and wildlife conservation, translated into K-12 academic standards to shape students’ environmental literacy, stewardship and outdoor skills. The Core Concepts identify what every citizen should know, feel and do related to fish and wildlife conservation.

Funding for the report was provided by the Multistate Conservation Grant Program, which is supported through special excise taxes on hunting, shooting, archery and angling equipment, a tax on boating fuels and license fees paid by America’s hunters and anglers.

The white paper can be downloaded from http://www.fishwildlife.org/pdfs/BenefitsofOutdoorSkills_WhitePaper_11-2010.pdf.

The National Fish Habitat Action Plan (NFHAP) met its ambitious objectives for 2010. When the Action Plan was enacted in 2006, the following four objectives were set to be completed by 2010:

> Conduct a condition analysis of all fish habitats within the United States by 2010.

> Establish 12 or more Fish Habitat Partnerships throughout the United States by 2010.

> Prepare a “Status of Fish Habitats in the United States” report in 2010 and every five years thereafter.

On the coastal side, scientists with the National Oceanic and Atmospheric Administration have completed a complementary habitat risk assessment for coastal waters in the lower 48 states and southeastern AK. These assessments are the first of their kind, portraying the condition of habitat nation-wide and at the individual river level.

The Association is now soliciting National Conservation Needs (NCNs) for the 2012 Multistate Conservation Grant Program (MSCGP). NCNs are the foundation of the MSCGP and establish the states’ priorities for the grant cycle. Each AFWA committee is allowed to submit one NCN. NCNs are due by February 11, 2011. Committees are encouraged to work together and submit joint NCNs.

Before submitting a new NCN, review the selected NCNs for the 2011 MSCGP since these NCNs may still be of highest importance and priority. Typically, if a committee is considering more than one NCN, the Chair asks committee members to vote and/or the Chair makes the final selection. It may be appropriate to refer NCNs to other committees or regional associations for their consideration.

All proposed NCNs from committees and the regional associations will be evaluated by the National Grants Committee, which will select NCNs to recommend for state directors’ approval at the March 2011 North American Wildlife and Natural Resources Conference. Letters of Intent will be solicited beginning in April to address the NCNs.

The guidelines for submitting 2012 NCNs, last year’s NCNs and a general timeline for the 2012 MSCGP are available online at www.fishwildlife.org/multistate_grants.html or visit AFWA's MSCGP blog to ask questions, http://fishwildlifemscgp.blogspot.com.
Posted by The Association of Fish and Wildlife Agencies at 11/19/2010 12:54:00 PM 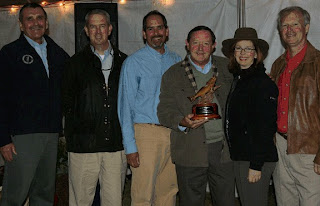 Charleston, SC – The Atlantic States Marine Fisheries Commission presented John Frampton, Director of the South Carolina Department of Natural Resources and Association of Fish & Wildlife Agencies 2009-2010 President, the David H. Hart Award, its highest annual award, at the Commission’s 69th Annual Meeting in Charleston, South Carolina. Frampton received the award in recognition of his long and distinguished career advocating for the greater good of fish and wildlife management and conservation along the Atlantic coast and throughout the entire nation.

The Commission instituted the “Captain David H. Hart Award” in 1991 to recognize individuals who have made outstanding efforts to improve Atlantic coast marine fisheries. The award is named for one of the Commission’s longest serving members, who dedicated himself to the advancement and protection of marine fishery resources.

Frampton has been an a leader in building strong personal and professional relationships within the natural resource community. His actions reflect his fundamental belief that such relationships lead to cooperation among state and federal natural resource management agencies and conservation and industry stakeholders, resulting in more effective conservation and management. This spirit of cooperation is one of the founding principles of the Atlantic States Marine Fisheries Commission.

For more than thirty years, Frampton also has been a champion for legislation and funding benefiting state natural resource management activities, securing millions of dollars for the states to restore and sustainably manage their fish and wildlife resources. In his own state, he secured significant state funds to acquire tens of thousands of acres of land for conservation easements and habitat restoration.

He was a guiding force in the development of the National Fish Habitat Initiative, directly benefiting Atlantic coastal states through the significant funding awarded to the Atlantic Coastal Fish Habitat Partnership (ACFHP). This coast-wide collaborative partnership strives to accelerate the conservation of habitat for Atlantic coastal, estuarine-dependent, and diadromous fish, and has great potential to restore Atlantic waterways and enhance productivity of many marine fisheries.

Frampton’s efforts to elevate the importance of natural resource management have greatly benefitted Atlantic states and have contributed to the betterment of the marine fisheries of the Atlantic coast.


ASMFC Vision: Healthy, self-sustaining populations for all Atlantic coast fish species or successful restoration well in progress by the year 2015.

Leading off this edition of the HQ, Ron Regan discusses the “Making of” AFWA’s Lead Ammunition and Tackle Resolution and why it gets at the heart of what the Association does best—developing policy and applying it at the national level.

On behalf of all the staff at the Association, we hope that you continue to find the HQ beneficial. The HQ/3Q 2010 can be found online at:
http://www.fishwildlife.org/pdfs/StaffReports/AssociationHQ_3Q-2010.pdf
Posted by The Association of Fish and Wildlife Agencies at 11/04/2010 06:41:00 PM