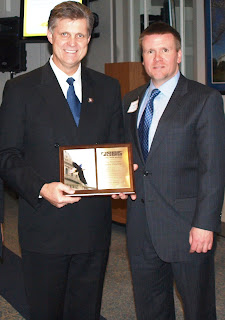 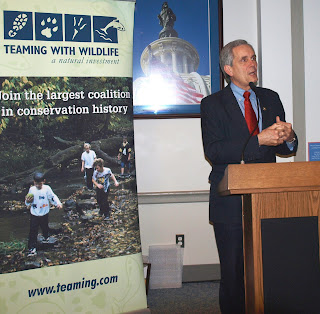 $740 Million Goes to States for Fish and Wildlife Projects

Department of the Interior Secretary Ken Salazar announced today more than $740.9 million will be distributed to the fish and wildlife agencies of the 50 states, commonwealths, the District of Columbia, and territories to fund fish and wildlife conservation, boater access to public waters, and hunter and aquatic education. These Wildlife and Sport Fish Restoration Program funds come from excise taxes and import duties on sporting firearms, ammunition, archery equipment, sportfishing equipment, electric outboard motors, and fuel taxes attributable to motorboats and small engines.

"The funds raised under the Wildlife and Sport Fish Restoration Programs have helped conserve our fish and wildlife resources and provide opportunities for outdoor recreation for more than half a century. These investments, which help create jobs while protecting our nation's natural treasures, are particularly important in these tough economic times,” Salazar said. “All those who pay into this program – the hunting and fishing industries, boaters, hunters, anglers, and recreational shooters – should take pride in helping to conserve our land and its fish and wildlife and provide benefits to all Americans who cherish the natural world and outdoor recreation.”

“State fish and wildlife agencies are proud to be funded by the hunting, fishing and boating community through this American system of conservation funding, which has been a successful model for many years,” said Rex Amack, President of the Association of Fish and Wildlife Agencies and Director of the Nebraska Game and Parks Commission. “This year’s record Wildlife and Sport Fish Restoration apportionment is vital in order for state agencies to continue their work to sustain healthy fish and wildlife populations and provide opportunities for all to connect with nature.”

Sport Fish Restoration is funded by the collection of excise taxes and import duties on sport fishing equipment, motorboat and small engine fuels, and pleasure boats. Sport Fish Restoration funds are apportioned to the states based on a formula that includes the land and water area, inland waters and the Great Lakes and marine coastal areas where applicable, and the number of paid fishing license holders. States, the District of Columbia, commonwealths, and territories use the funds to pay for stocking fish; acquiring and improving sport fish habitat; providing aquatic resource education opportunities; conducting fisheries research; maintaining public access, and the construction at boat ramps, fishing piers, and other facilities for recreational boating access.

More than 62 percent of Wildlife Restoration funds are used to buy, develop, maintain, and operate wildlife management areas. Since the program began, state, commonwealth, and territorial fish and wildlife agencies have acquired 68 million acres through fee simple, leases, or easements, and operated and maintained more than 390 million acres for hunting since the program began. In addition, agencies certified over 9 million participants in hunter education.

“This source of conservation funding is important not only measured by its dollar amount, but also by legislative safeguards preventing its diversion away from state fish and wildlife agencies,” said Rowan Gould, acting Director of the U.S. Fish and Wildlife Service. “For states working to ensure a future for fish and wildlife – and opportunities for people to enjoy them – precious few programs offer this level of support and reliability.”

Since the inception of the Dingell-Johnson Sport Fish Restoration Act, states, commonwealth, and territorial fish and wildlife agencies have acquired 360,000 acres through fee simple, leases, or easements. They have operated and maintained more than 1.5 million acres annually and they stocked over 6.8 billion fish and restored more than 1.7 billion fish throughout the country; renovated or improved 6,400-boat access sites; and had over 11.9 million participants in the aquatic resource education program.