More than $61 million will be distributed to the fish and wildlife agencies of the 50 states, commonwealths, the District of Columbia and U.S. territories to help conserve and recover imperiled fish and wildlife species through the State Wildlife Grants (SWG) Competitive Program, the U.S. Fish and Wildlife Service announced yesterday.

The State Wildlife Grants Program provides federal dollars to every state and territory to support the development and implementation of their unique State Wildlife Action Plans, which assess the health of each state’s wildlife and habitats, identify the problems they face and outline the actions needed to conserve them over the long term to prevent wildlife from becoming endangered.

“The State Wildlife Grant program exemplifies the Department of the Interior’s strong support for conservation efforts by the states,” said Secretary of the Interior, Ken Salazar. “Along with President Obama’s commitment to the Land and Water Conservation Fund, the State Wildlife Grants will provide states critical funding to help conserve their highest priority wildlife, plants and habitat.”

“State and territorial fish and wildlife agencies have a long history of success in conserving game species, thanks to the support of hunter and angler license fees and federal excise taxes; but 90 percent of our nation’s wildlife—tens of thousands of species—is neither hunted nor fished,” said Matt Hogan, Executive Director of the Association of Fish and Wildlife Agencies. “State Wildlife Grants help to partially fill the gap in conservation funding by supporting projects that prevent all wildlife from declining to the point of being endangered.”

Projects supported by State Wildlife Grants protect and restore important lands and waters; collect information on what kinds of wildlife are in trouble; and facilitate partnerships with landowners to protect declining species and habitats on public and private lands. Priority for use of grant funds is placed on those species and habitats with the greatest conservation need.

“By emphasizing a proactive approach, the State Wildlife Grants Program supports states and territories in their efforts to conserve wildlife and habitats before they become more rare, risky and costly to protect,” said Mark Humpert, Teaming With Wildlife Director at the Association of Fish and Wildlife Agencies. The 6,000-member Teaming With Wildlife coalition, made up of organizations and businesses, strongly supports increased State Wildlife Grant funding for wildlife conservation, education and nature-based recreation.

For more information about State Wildlife Action Plans and to read an accomplishments report, visit www.wildlifeactionplans.org.

To view the State Wildlife Grant allocations for each state, go to http://wsfrprograms.fws.gov/Subpages/GrantPrograms/SWG/SWG09Apportionment.pdf.
Posted by The Association of Fish and Wildlife Agencies at 5/20/2009 03:57:00 PM

Chairman of the House Energy and Commerce Committee, Henry Waxman (CA) and Energy and Environment Subcommittee Chairman, Edward Markey (MA), introduced the “The American Clean Energy and Security Act” this afternoon. The 932-page bill (HR 2454) proposes policy for a cleaner, energy-independent America that considers the impacts of climate change on fish and wildlife and their habitats and promises dedicated funding to state and federal natural resource agencies to safeguard our nation’s natural resources.

The Energy and Commerce Committee will begin markup of the bill on Monday, May 18 at 1:00 p.m., which is anticipated to win approval before the Memorial Day recess.

Earlier today, the Association issued a joint statement with the National Wildlife Federation, Pheasants Forever, Theodore Roosevelt Conservation Partnership, Trout Unlimited and the Izaak Walton League thanking Chairmen Dingell, Waxman and Markey on behalf of sportsmen and women for championing the bill's adaptation funding.
Posted by The Association of Fish and Wildlife Agencies at 5/15/2009 05:02:00 PM

The Association of Fish and Wildlife Agencies applauds Chairman of the House Energy and Commerce Committee, Henry Waxman (CA); Chairman Emeritus, John Dingell (MI); and Edward Markey (MA), Energy and Environment Subcommittee Chairman, for their leadership in dedicating funding for wildlife and natural resources protection in their proposed Waxman-Markey Allowance Allocation released today for the American Clean Energy and Security Act of 2009.

Starting at one percent of the total allowance value in 2012 and increasing to four percent by 2027, the portion of climate-derived revenue from the auction of carbon credits allocated to state and federal natural resource adaptation programs would help to remediate the effects of a changing climate on fish, wildlife and their habitats.

"We appreciate the work of Chairmen Waxman, Dingell and Markey and all of the conservation champions who drafted the emissions allowance allocations to be included in the bill,” said Matt Hogan, Executive Director of the Association of Fish & Wildlife Agencies. “Pressures on fish and wildlife and their habitats caused by climate change emphasize the need for increased conservation and science-based management and the appropriate, dedicated funding to do so.”

For more than 100 years, state fish and wildlife agencies have been addressing threats to fish and wildlife including altered habitat, invasive species, the spread of diseases and population changes; however, climate change is escalating and accelerating these threats, making it much more difficult and costly for agencies to manage.

Funded, adaptation programs that are delivered by state and federal agencies in partnership with the private conservation community are not only vital to the health of fish and wildlife resources; but also to the quality of life for Americans that functioning ecosystems likewise provide.

Functioning habitats provide cleaner air and water and flood attenuation as well as carbon capture through sequestration. The economic contributions accrued from the recreational use of natural resources support millions of jobs nationwide and stimulate nearly ten percent of all consumer spending.

“The Chairmen have laid a strong and broad foundation for critical natural resources adaptation programs that will help ensure the sustainability of fish and wildlife, provide Americans with healthier environments and deliver economic benefits to communities nationwide,” added Hogan. “We look forward to continuing to work with them to report the bill out of the Energy and Commerce Committee, and on subsequent passage by the House."
Posted by The Association of Fish and Wildlife Agencies at 5/15/2009 01:59:00 PM

On behalf of the Association, Kristin Saunders Evans, Assistant Secretary for Land Resources of the Maryland Department of Natural Resources, testified yesterday before the House Natural Resources Subcommittee in strong support of the Joint Ventures Burd Conservation Act of 2009 (HR2188) from Congressman Frank Kratovil (MD) that would provide express authority for the migratory bird Joint Ventures (JVs); and in support of a bill from Congressman John Dingell the Migratory Bird Habitat Investment and Enhancement Act (HR1916), that would incrementally increase the federal duck stamp fee.

The Association worked closely with the Subcommittee staff and U.S. Fish and Wildlife Service (USFWS) staff in drafting the JVs bill to ensure that the bill reflects the success of the existing JVs as being grounded in a federal-state-private partnership; gives statutory deference to existing JVs; and establishes guidance for USFWS consideration of new JVs.

"It is imperative, especially in light of future impacts of climate change, that we maintain enough high quality habitats across the hemisphere to sustain viable populations of migratory birds," added Saunders Evans. "This is why the Joint Ventures for Bird Habitat Conservation (HR2188) and the Migratory Bird Habitat Investment and Enhancement Act (H.R. 1916), programs that emphasize habitat conservation and management across the hemisphere, are so critical. 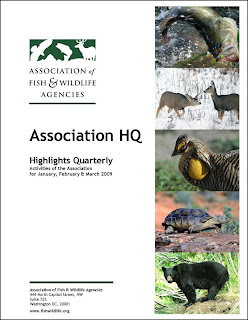 The Association of Fish and Wildlife Agencies today released its second issue of the Association HQ—Highlights Quarterly, which summarizes what the Association accomplished in the first quarter of 2009.
Leading off the HQ-1Q 2009, Matt Hogan, the Association’s Executive Director, considers the question, “Are we relevant?” followed by an overview of some of the major issues and actions that the Association committees addressed at the North American Wildlife and Natural Resources Conference in March and the impact of those issues on the work of state fish and wildlife agencies.
This edition also provides a report on the activities of the 111th Congress between January and March relevant to fish and wildlife funding and legislation as well as progress achieved in advancing cross-cutting member issues and species-based interests through programs, partnerships, outreach and other initiatives.
Read Association HQ-1Q highlighting activities of the Association from January, February and March 2009.
Posted by The Association of Fish and Wildlife Agencies at 5/08/2009 11:22:00 AM

“Climate change, conservation of precious natural resources, maintaining clean air and water and other environmental challenges are pressing and complex issues that influence human health, economic development, and national security,” said Senator Reed in his introductory comments. “Environmental education will help ensure that our nation's children have the knowledge and skills necessary to address these critical issues. In short, the environment should be an important part of the curriculum in our schools.”

The legislation will authorize $100 million over each of the next five years for developing school curricula for outdoor learning activities, teacher professional development and the creation of state environmental literacy plans.

“It's great to see that the state environmental literacy plans are to be developed by state education departments in consultation with state environmental agencies and state natural resources agencies, and to see that state natural resources agencies will be eligible to receive sub grants,” observed Dr. Judy Silverberg, chair of the Association of Fish and Wildlife Agencies’ Conservation Education Strategy Working Group and Wildlife Education Programs Supervisor with the New Hampshire Fish and Game Department. “The good news for state fish and wildlife agencies is that state natural resource agencies are specifically identified in both House and Senate versions. ”

State natural resource agencies were not included in an earlier version of the bill passed by the House last year.

The CE Strategy also has developed a Field Investigations Guide, which shows teachers how to conduct field investigations based on the research methods used by fish and wildlife agency biologists. A working session at the Association's recent Conservation Education Conference in Arkansas focused on environmental literacy plans. Future actions of the CE Strategy include coordinating with state education department science supervisors to incorporate core concepts into state science standards and to add social studies, technology and math correlations to the Field Investigations Guide.

The Association is a member of the No Child Left Inside Coalition, a group of about 1,300 organizations to advocate for greater outdoor educational and recreational activity in schools.
Posted by The Association of Fish and Wildlife Agencies at 5/01/2009 06:47:00 PM