Webinar: Dispersal Hazards of Pseudogymnoascus destructans by Bats and Human Activity at Hibernacula in Summer

A Webinar Presentation with:

Abstract: Bats occupying hibernacula during summer are exposed to Pseudogymnoascus destructans (Pd), the causative agent of white-nose syndrome (WNS), and may contribute to its dispersal. Furthermore, equipment and clothing exposed to cave environments are a potential source for human-assisted spread of Pd. To explore dispersal hazards for Pd during the nonhibernal season, we tested samples that were collected from bats, the environment, and equipment at hibernacula in the eastern US between 18 July–22 August 2012. Study sites included six hibernacula known to harbor bats with Pd with varying winter-count impacts from WNS and two hibernacula (control sites) without prior history of WNS. Nucleic acid from Pd was detected from wing-skin swabs or guano from 40 of 617 bats (7% prevalence), including males and females of five species at five sites where WNS had previously been confirmed as well as from one control site. Analysis of guano collected during summer demonstrated a higher apparent prevalence of Pd among bats (17%, 37/223) than did analysis of wing-skin swabs (1%, 4/617). Viable Pd cultured from wing skin (2%, 1/56) and low recapture rates at all sites suggested bats harboring Pd during summer could contribute to pathogen dispersal. Additionally, Pd DNA was detected on clothing and trapping equipment used inside and near hibernacula, and Pd was detected in sediment more readily than in swabs of hibernaculum walls. Statistically significant differences in environmental abundance of Pd were not detected among sites, but prevalence of Pd differed between sites and among bat species. Overall, bats using hibernacula in summer can harbor Pd on their skin and in their guano, and demonstration of Pd on clothing, traps, and other equipment used at hibernacula during summertime within the WNS-affected region indicates risk for pathogen dispersal during the nonhibernal season.

Webinar: Overview of the Animal Welfare Act and Institutional Animal Care and Use Committees (IACUCs) 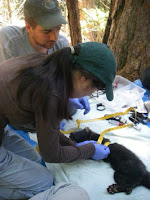 Abstract: The USDA Animal Welfare Act (AWA) is the federal law initially written to pertain to animals used in biomedical research but which has been amended in recent years to include animals in wildlife research. Institutions involved in wildlife research have established Institutional Animal Care and Use Committees (IACUCs) to ensure compliance with the AWA. The US Forest Service is amongst several federal and state wildlife agencies that have established IACUCs and have realized the benefit for their research scientists. This webinar will review the requirements of the AWA and its regulations, help to understand key terminology and where to find informational resources, explain the role and responsibilities of the IACUC, and discuss perspectives on determining when/if IACUC oversight is needed in wildlife research and other wildlife activities to ensure ethical use of wildlife resources and to promote distribution of scientific knowledge.