The State Wildlife Grants Competitive Program provides federal dollars to support the development and implementation of each state’s unique State Wildlife Action Plan, which assesses the health of wildlife and habitats, identifies the problems they face and outlines the actions needed to conserve and recover imperiled fish and wildlife species over the long term.

“Across the country, conserving high quality habitat, restoring degraded lands and waters and removing invasive species are among the top priorities for conservation,” said Ron Regan, Executive Director of the Association of Fish & Wildlife Agencies. “Though the challenges to keeping wildlife from becoming endangered are greater than ever before, State Wildlife Action Plans present a national action agenda for the conservation of wildlife species that have not benefited from conservation attention due to lack of funding.”

Priority for State Wildlife Competitive Grant funding is placed on multistate, cooperative conservation projects focused on species and habitats with the greatest conservation need. States and their partners will match the federal funding by more than $2 million in non-federal funds.

“We can wait for wildlife to decline and react to problems with expensive, last-ditch efforts or we can take proactive, cost-effective steps to prevent wildlife from becoming endangered before it is too late,” said Mark Humpert, Teaming With Wildlife Director at the Association of Fish and Wildlife Agencies. The 6,300-member Teaming With Wildlife coalition, made up of organizations and businesses, strongly supports increased State Wildlife Grant funding for wildlife conservation, education and nature-based recreation. “The State Wildlife Grants Program helps states turn the trend around and reduce the need for listing many species and costly recovery efforts,” added Humpert.

The U.S. Fish and Wildlife Service has awarded State Wildlife Competitive Grants to the following projects:

Iowa Department of Natural Resources: The Use of Fire and Grazing to Improve Grassland Habitats for Species of Greatest Conservation Need (SGCN)—to support the development of an effective management framework for increasing the diversity of grasslands in working landscapes, thereby increasing the capacity of these areas to support viable populations of SGCN. Project activities will take place on both public and private lands. Iowa DNR will partner with the Missouri Department of Conservation as well as personnel from Illinois and Oklahoma to accomplish project goals. Federal funds awarded: $732,904; non-federal match: $317,113

Michigan Department of Natural Resources: Oak Savanna, Pine Barrens and Jack Pine Restoration in Michigan and Ohio for Species of Greatest Conservation Need—to restore and enhance 600 acres of oak savanna in Michigan and Ohio for the recovery and benefit of the Karner blue butterfly and restore 400 acres of pine barrens and jack pine forest in Michigan for the recovery and benefit of Kirtland’s warbler. The project also will potentially benefit 188 species of greatest conservation need. Forty-five percent (or 450 acres) of the project lands fall under private ownership. Federal funds awarded: $852,484; non-federal match: $383,000

To view the State Wildlife Grant allocations for each state, go to http://wsfrprograms.fws.gov/Subpages/GrantPrograms/SWG/SWG09Apportionment.pdf.

For more information about State Wildlife Action Plans and to read an accomplishments report, visit www.wildlifeactionplans.org.
Posted by The Association of Fish and Wildlife Agencies at 5/21/2010 03:40:00 PM

Ron Regan Elected to TRCP Board

The Theodore Roosevelt Conservation Partnership (TRCP) announced today that Ron Regan, Executive Director of the Association of Fish & Wildlife Agencies, has been elected to its board of directors.

“Ron Regan’s breadth of experience in fish and wildlife management – as evidenced by his current role as leader of the Association of Fish and Wildlife Agencies – will enable the TRCP to take great strides in matters of importance to sportsmen on both state and federal levels,” said Jim Martin, chairman of the TRCP board of directors.

Regan was elected at the TRCP spring board meeting, which took place in Nashville, Tenn., earlier this month.

About TRCP
Inspired by the legacy of Theodore Roosevelt, the TRCP is a coalition of organizations and grassroots partners working together to preserve the traditions of hunting and fishing.
Posted by The Association of Fish and Wildlife Agencies at 5/19/2010 02:44:00 PM

Statement from the Association about the American Power Act

The Association appreciates the release of draft bill language of the American Power Act from Senators Kerry (MA) and Lieberman (CT), which also reflects the work of Senator Graham (SC), as a solid starting point for further development of comprehensive clean energy-climate change policy.

Our initial analysis suggests that the draft retains the agreed-to (by the conservation community) policy architecture of state and federal natural resource adaptation programs, which will enable appropriate responses to the effects of climate change on fish, wildlife and their habitats.

It is not entirely evident if funding is dedicated or subject to appropriations; dedicated funding is essential to the success of natural resource adaptation programs. It is clear that funding for these programs is not available until year seven forward; earlier availability of funding for natural resource adaptation programs is likewise essential to success.

We look forward to continuing to work with Congress as the bill matures through the legislative process to clarify and improve these provisions.
Posted by The Association of Fish and Wildlife Agencies at 5/13/2010 10:57:00 AM 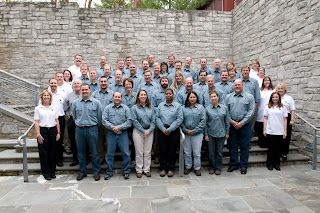 The National Conservation Leadership Institute (NCLI) has just graduated its fourth yearly class — a cohort of 36 Fellows. This group of Fellows included 25 state fish and wildlife leaders, six from federal agencies such as USGS, USFWS, and NPS and four from NGOs (NWTF, NFWS, and RMEF) as well as one tribal leader from the Navajo nation.

The culminating event for this fourth cohort was held at Big Cedar Lodge in Missouri and Fellows made presentations regarding their individual leadership projects. These presentations focused on what leadership learning from the NCLI the Fellows applied and what practical lessons were gleaned from applying leadership concepts from the Institute. It was a very informative three-day event with time out for an evening steak fry and graduation ceremony.

The journey to Big Cedar Lodge marked the completion of the NCLI seven-month program during which Fellows completed pre-work online learning sessions from last September; then a 10-day residency in October where classroom and experiential learning about leadership was the focus; followed by a six-month effort where each Fellow worked on his/her individual leadership project and received coaching from peers. Graduation from the NCLI has been described by many Fellows as “life-changing!”

The NCLI is staffed by the AFWA Management Assistance Team and is governed by a board with representatives from the USFWS, AFWA, NFWF, WMI, TCF, Kentucky Dept. of Fish and Wildlife Resources, Patagonia’s Freedom to Roam, Resource Management Services LLC, Greener Options Inc., Watershed Results LLC and Boone and Crockett Club.

The NCLI is now accepting online applications for cohort five which will begin in September 2010. Applications are due by May 15, 2010. To apply go to: conservationleadership.org
Posted by The Association of Fish and Wildlife Agencies at 5/12/2010 01:23:00 PM 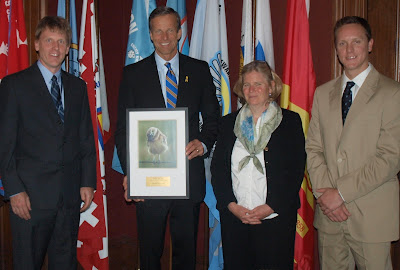 (Madison, WI) This spring, millions of birds are returning to Wisconsin from distant winter haunts. Hungry and tired from thousands of miles of perilous travel, birds can count on Wisconsin to provide the habitat they need. But that is not always the case south of the border, where more than half of Wisconsin’s 238 breeding bird species spend the winter. Throughout Latin America, deforestation and incompatible development are squeezing Wisconsin’s birds into ever smaller wintering grounds, threatening their long-term survival.

Recognizing the need to act internationally on behalf of Wisconsin’s birds, the Natural Resources Foundation of Wisconsin joined public and private partners at the Wisconsin Department of Natural Resources (DNR) and Neenah Paper to safeguard important migratory bird wintering habitat on Costa Rica’s Osa peninsula. The three partners recently made a combined contribution of more than $60,000 to the non-profit Friends of the Osa.

According to Craig Thompson, regional land leader at the Wisconsin DNR, his state’s commitment to safeguarding the Osa peninsula was inspired by a national movement called Southern Wings — a partnership of conservation agencies that supports funding for projects to protect migratory bird habitat beyond state borders in Latin America and the Caribbean.

Southern Wings was launched in 2008 by the Association of Fish and Wildlife Agencies to conserve priority migratory bird species by monitoring the status of populations; restoring and managing migrant bird habitats; acquiring lands in critical core habitats; educating the public; and more. In addition to Wisconsin, Arizona, Arkansas, Iowa, Missouri, Oklahoma and South Dakota are active contributors.

“Within the next 20 years, more than 80 percent of land and its wildlife in Latin America and the Caribbean could be adversely impacted by development, putting critical habitat for migrant birds at risk,” Ron Regan, Executive Director of the Association of Fish and Wildlife Agencies, said. “Southern Wings provides state fish and wildlife agencies with a funding mechanism to help conserve priority migratory bird species throughout their lifecycle.”

Thompson, who coordinates Wisconsin’s participation in Southern Wings, said a precedent helped his state decide to join the initiative. “While this is the first time we’ve supported wintering habitat protection in Latin America for our declining songbird populations, the DNR has supported waterfowl breeding habitat conservation projects in Canada for nearly two decades.”

According to Charlie Luthin, executive director of the Natural Resources Foundation of Wisconsin, the combination of corporate dollars, individual gifts, and contributions from the DNR demonstrates a new commitment to protecting Wisconsin’s migratory birds. “No matter how much good work we do for birds in the state, we can’t keep them here year-round.” Luthin hopes this project will encourage others to get involved. “People now understand that the habitat loss is real and that we can’t really protect our birds without protecting their winter homes as well,” he added. “The threats are sobering, but the collective response has been inspiring, both here in Wisconsin and in other states.”

To read the full story, go to www.fishwildlife.org/press_5.4.10.html.

To learn more about the Natural Resources Foundation of Wisconsin and how it promotes the protection and enjoyment of Wisconsin’s public lands, waters and wildlife, visit www.wisconservation.org.