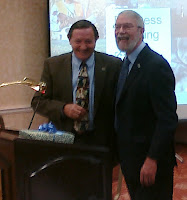 The Association of Fish and Wildlife Agencies elected West Virginia Division of Natural Resources Wildlife Resources Section Chief, Curtis I. Taylor, its new president on Spetember 29, 2010 during the Association’s 100th Annual Meeting in Grand Rapids, Michigan. He is tasked to lead AFWA’s national agenda for sound, science-based fish and wildlife management through September 2011.

Taylor has more than 31 years of experience with DNR, where prior to becoming Chief in 2001, he was the Federal Aid Coordinator and worked on various turkey research projects and other fish and wildlife management programs including serving as co-project leader on the Wild Turkey Population Dynamics Study. He directed the first radio telemetry study of ocellated turkeys in Guatemala for Wildlife Conservation International and Hornocker Wildlife Institute and has served on the National Wild Turkey Federation Technical Committee since 1985, receiving the organization’s highly coveted Henry S. Mosby Award in 2005. Taylor also serves on the Steering Committee for the West Virginia University Cooperative Fish and Wildlife Research Unit.

“There is nothing like a 100th Annual Meeting to think about what we’ve done and where we will be going,” said Taylor, the first AFWA President to hail from West Virginia. “We still believe in a cooperative, scientifically sound and legally firm approach to protect and enhance the North American Model of fish and wildlife management that is unique to the United States and the envy of other countries that have tried to duplicate it. Our partnership with industry through the Pittman-Robertson Wildlife Restoration and Dingell-Johnson Sport Fish Restoration Acts is the cornerstone for funding conservation."

During his tenure as president, Taylor plans to focus the work of the Association membership on fostering better relationships with the angling, hunting and shooting sports industries; recruitment and retention of license-buying hunters and anglers; and the impacts of energy development on fish and wildlife resources.

“Energy does not come without a price,” said Taylor. “We need to make sure that wildlife is not stuck with the bill.”

In addition to his responsibilities as President, Taylor also serves as the Co-Chair of AFWA’s International Relations Committee. In this role, he represented the United States at the Convention on International Trade in Endangered Species in Qatar in early 2010 to advance state and federal statutory partnerships and work cooperatively on international fish and wildlife policy.

“I appreciate the trust [the Association members] have put in me,” concluded Taylor.